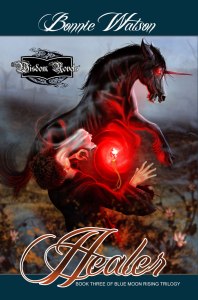 (This book is available in print and ebook format (www.WisdomNovels.com)

There were not many instances Chronicles felt he had forgotten something. And yet, in the midst of preparing his people to invade human territory, there was a fleeting moment where he realized he had….

Ettotu’s Glade was a close-knit community of forests in the land of No’va. It flourished as a renowned location for the shape-shifter race of Lo-ans’rel. Known as Healers, they were quick to manipulate their surroundings into a place of supreme tranquility. There were no borders to contend with, no need for lookouts. Nature provided all that was required, from food and shelter, to the spider-spun clothing worn day to day. In return, Healers made certain the balance between plant and animal remained intact, even extending their talents to human farmlands in the surrounding areas.

Fields brimming with large quantities of vegetables sent families into frenzy of pouring and mixing, until the proper formula was complete and passed into a bowl. As Healers waited patiently, hidden in the guise of various animal forms, their sensitive ears would prick at the hopeful words, “There be Healers close by!”

Then the bowl, filled to the brim with savory liquid, was placed within an appropriate distance from the house to watch the different animals emerge from hiding. It was during one such feeding that Chronicles met Greverlend. Those lovely garnet eyes held many an adoring gaze, but it was Chronicles’ heart it won.

In his true form, Chronicles stood just shy of a fully-grown human, with one oddity that distinguished Lo-ans’rel from humans – the ears. Reflecting the same skin tone, their pointed tips darkened with a tuft of white fuzz covering the tips. At the approach of another, one flicked back like that of a wolf to tune in distinct movements.

“As beautiful as Nature can be, nothing compares to you, my dear.” He turned and, slightly bowing, took her hand to place a kiss atop her creamy flesh.

“You always were a gentleman,” she replied, allowing him to thread a few fingers through her wavy brown hair. Ears laid back in content. “Father reviewed your request today.”
“And?” He laid a hand over hers on the swell of stomach. It would be another four months before the child was due, but already Chronicles could feel excitement. To become a parent and pass down the Lo-ans’rel ways was a major accomplishment. As shape-shifting was their way of life, it took great patience to teach a young Healer, and Chronicles felt he was ready to present himself as an exceptional father.

Strands of light gray hair swayed over his forehead in the passing breeze, and Chronicles ran a hand through it to set it in place. The idea of humans engaging with Healers was not something new.

But when one falls in love… he thought with skepticism. “Chaotic?” He stepped aside in a pace to better collect his thoughts. “Meaning…it’s corrupted? Is that not what’s happening to us now? I’m just a little concerned that we may be tangling with something Nature is reacting against. Have you seen what becomes of their offspring? And now with the shift in magic – I ask how he thinks it’s non-related?”

Greverlend laughed. “Having a human’s child doesn’t mean corruption. Our blood is still the same. They can still shift.”

“But there’s never been a Healer who’s not One!” Chronicles complained. “These new… Healers. It just worries me that Windchester isn’t thinking this through.” The image of a fat, squatty clan member came to mind. Such an obscurity to their normally sleek look made for a poor excuse as a shape-shifter, and he made sure to mentally pass the image to his mate.

She shook her head. “I’m fairly certain Providence wouldn’t have picked my father to be clan leader if he didn’t know what he was doing. The future of our people may depend on this, as our numbers are already too thin.”

“Providence…” The day of his disappearance had left Greverlend’s father in Chronicles’ stead. Chronicles never understood why he had not been picked. Was it not the clan’s decree that father pass along leadership to his firstborn? “I just don’t understand the lot of it. But perhaps you’re right. Maybe he saw something in Windchester I may have missed.”

A sudden shift of energy coursed through the earth. Although never directly moving the soil beneath their feet, they both staggered back as though it had. Ears flattened in alarm. The energy moved quickly, and was soon gone.

“Chronicles…” Greverlend’s voice grew frail with uncertainty. “That wasn’t Nature’s doing. Something else is drawing power.”

He put a protective arm around her to hold her close, and cursed in silence why he could not pinpoint where the energy was traveling. He decided to open his thoughts to the clan members within the area, mentally asking each what they felt and their opinion of it. None had an answer but one – the advisor Eumaeus.

Speaking only within the mind, he answered, There’s been some trouble in the human realms lately, something about a rogue shape-shifter or some nonsense! Some of them are even reacting as though they’ve never seen us before.

Odd, Chronicles replied. What about that pull of energy?

Apparently, they’ve sent a magic-user to speak with Windchester about it. They’re working out some sort of plan to alleviate the confusion but—Here, Eumaeus’ thoughts were interrupted, for at that moment Greverlend took hold of Chronicles’ arm in a fierce grip.

Ignoring the Healer still connected to his thoughts, Chronicles followed his mate’s terrified gaze to a trail of smoke billowing through the distant trees. Or is it? He wondered, watching the dance of transparent gases distort the forest canopy into a liquefied haze.

No no no! Eumaeus screeched, enough to startle Chronicles back to the current conversation. This can’t be!

Where is Windchester! Chronicles demanded, sensing Greverlend as she sought her father from the other Healer as well.

A flurry of birds scattered into flight. They were all Healers fleeing at the first flicker of red and orange flames. Leaves curled into black ruin. Branches toppled with thick black smoke churning the sky. Children screamed, scrambling to find family members. Couples sought each other in various shifted forms.

“Get out of the forest!” Chronicles exclaimed and pushed Greverlend away. “Hurry!”
She hesitated, but at the crash of tree falling against tree, then slamming into the ground, she thought better of it. Chronicles waited until she was no longer within sight, though their thoughts stayed connected as he went to search for members in need of help.

Healers everywhere were choking from the smoke. Chronicles himself fell to its ravenous fumes in a fit of coughing. A crack from above, and the Healer had just enough time to dive sideways to avoid a large branch crushing him.

Where’s my daughter? came the thoughts of Windchester.

Safe! Chronicles returned, and allowed him to sense her connection before he was entirely satisfied.

I’ll get the rest!” Windchester exclaimed. Get yourself out! Don’t wait! It’s coming!

Chronicles barely had a moment to register his leader’s words when a string of flames swept through the center of the clearing. The ironic movement of fire made no sense, as though something else controlled it. Only when it had finished dividing the ground did it rise up in a great wall of lapping orange and red waves.

That’s when he saw it.

He knew everyone was gone, but there something stood, away from the flames that somehow kept it at bay. Its black flesh resembled the charred, dead leaves crumbling on the ground. Nostrils flared when its head turned slowly toward the lone Healer and stared with pupil-less eyes – red eyes! A cloven hoof pawed the ground. The head dipped, a single horn protruding from….

It can’t be! Chronicles stared. It was in this fleeting moment that he realized why Windchester had been so persistent to interact with humans, for something so beyond the raw balance of Nature could mean the destruction of all.

As swift as it came, the memory was gone.

Momentarily confused, Chronicles shook his head at the uncanny flashback. Staring out over the homeland of his people from the mountaintop in Crystal Valley, he tried again to recall what the memory had meant.

A spec of white surfaced the forest canopy from below. A White Wing, he realized as it lifted off into flight and began circling ever higher. The Harma ‘Keyarx temporarily left his line of vision to fly up behind the rocky slope. When a great wind billowed his robes in the course of landing, he knew it had approached from behind.

Chronicles needed no introductions to know who started speaking.

“At your word, we are ready to proceed.”

“I am most grateful to you and your kind, Rusha,” the Lo-ans’rel leader greeted without turning.

The harpy joined Chronicles at the cliff’s edge. Though he kept his wings at ready, he relaxed the top feathers around his face and shoulders. The similarity to humans when his plumes lay flat caused the leader to purse his lips in a scowl. If not for the dark patterns crossing under each eye and down the cheek, Chronicles would have dubbed the creature human whether he was or not.

Again, he tried to recall the memory that had plagued him a moment earlier, to no avail. The need to finish all preparations outweighed the possibility that something was amiss.

“Once we receive word from either my son or Jangus, we will proceed according to plan,” Chronicles stated.

Rusha shot him a quizzical look. “I would have thought you’d keep Jangus here in case Shy failed to report back.”

The Healer sighed. “No doubt he will, but time is of the essence. He’d do better to know there are limitations to my patience.”

They stood a moment more until, used to the Healer’s lack of immediate response, the harpy took it as a sign to leave and pushed off from the ledge into flight.

Chronicles watched him go, waiting until the White Wing was well below the cliffs before shifting. A silver glow enveloped his form, then faded with renewed transformation. In the form of an owl, the leader followed the harpy’s path and headed for the valley below.

Feedback is welcome, since this is a rough draft of the chapter(s). More coming soon.